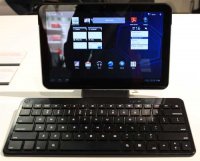 The Mobile World Congress 2011 in Barcelona Spain showcased new mobile phones, tablet Pcs and mobile software with the main buzz about apps. Here is what is happening in the world of mobile phones and how it will influence the online gambling industry soon.

The Mobile World Congress featured over 50,000 in attendance at the conference and a few companies and products seemed to outshine the rest.

However the biggest thing to take away from the conference is how users will use their phones in the future and have an influence on mobile traffic.

Cloud computing is starting to change how people uses computers and access data.

Perhaps the most interesting companies that flew under the radar were anyone associated with mobile traffic and those that offer mobile marketing services.

The main show stoppers at this years' event went to a few companies and maybe some categories as well.

Samsung with their display of Android phones, their Samsung tablet and the new Samsung Galaxy S II.

Next on the list, LG had on display the world's first 3D mobile phone.

Only time will tell if 3D is just a buzz word or if users truly like the 3D experience so much they want it everywhere including for casinos and bingo.

A large section of the conference floor space was dedicated to mobile apps or app world.

Tablets in general seemed to dominate the show thanks to the launch of the iPad in 2011.

Tech geeks can expect a wave of these devices as hundreds of different models are launching this spring.

The best tablet on display was the Motorola Xoom that will launch a high end tablet using Android 3.0 Honeycomb.

This tablet supports a bluetooth keyboard to work as a mobile desktop.

Although I thought the Motorola Xoom tablet was the most impressive item on display, expect Samsung to own a big piece of this market with their Galaxy S and S II models.

Blackberry is getting closer to launching their own Tablet using their own BlackBerry OS and making a strong push into the app markets.

Blackberry is trying to solidify their reputation as having the business phones and being the choice smartphone for the business world.

Their BlackBerry Playbook has many of the features you would find on an iPad or a tablet but Blackberry Apps is the main goal in mind to cover their market share.

The Samsung tablets are already on the market and seem to compliment their Android phone Samsung Galaxy S.

The Android operating system runs smoothly and their apps are experiencing massive growth.

The iPhone had the head start in the apps developments but with Apple's lack of cooperating with Flash and their lock down of their store, developers are left wondering if it is safe to rely on one company.

The Motorola Xoom might take some time for consumers to accept them into the Tablet world but once they see their new toy with Android 3.0 Honeycomb they might give it a chance.

It features a smooth smart operating system with a great layout. It has dual core processing and can multi-task easily and runs very fast.

This device also features HDMI input/output and makes this device a potential winner in 2011 for Tablets.

The cloud might be a buzz word that is confusing a lot of users and some of you may already be using cloud computer and software services without even knowing it.

Using cloud networks now changes all markets from how we use your tv, computer, internet and mobile phones.

The full change hasn't happened yet but it is starting.

Apps are starting to take over.

Mobile payments are changing fast and soon maybe all your pocket change will be fully replaced by phones.

However just walking around in any city centre your phone will eventually do so much more.

Just point your phone in a direction and look for sales, information and who knows maybe even communities.

Ad spaces can change quickly by being just bar codes but you can expect ads to be far more interactive.

You can get users streaming live sports and with just as much ease be able to bet on that game with little interuption.

The bottom line is mobile phone technologies have improved since 2005 when everyone thought mobile gambling would be king.

Some standards are now in place for operating systems and ways of browsing content.

Data speed rates have increased while prices have been somewhat standardized.

Smart phones are the growing trend and things are truly just getting started as the world gets more connected and more people start spending more time on their phones.

How will gambling on mobile phones change?

Gambling operators are becoming quick to notice that more of their traffic is coming from mobile phones so are producing mobile applications.

For online sportsbetting more apps are being created to place bets with ease.

Online casinos are now rolling out applications for iphones, android and blackberry.

Bingo is next on the mobile gambling list with a few more applications while poker has been developed for mobile phones but remains the least realistic application for making money.

So if you didn't attend the conference what do you need to know about the current and future world of mobile phones and marketing?

The world will be more connected with faster speeds and more smart phones than ever.

More apps will be developed especially in terms of the b2b sense as more websites need to create their own applications for specific users and mobile phones.

The biggest buzz word at this conference was apps.

Tablets seem here to stay and represent another opportunity for webmasters and operators to profit.

Mobile phones will be used more for banking and making payments with your phone will become a normal habit.

Do you have questions or information to share about mobile marketing and mobile gambling? If so contact us.

Dunder to exit UK market by the end of this month