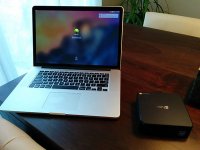 This article isn't meant to say that Microsoft will completely go out of business and that people won't be using any of their products, but the company used to be the biggest player in the world of computers and the internet. They used to be a leader and now it seems like the company is a follower and their products and services reflect that. It as this past weekend I finally said bye bye to Windows and in particular Windows 8. After working with Windows for a few years, it is time to move on to something else and that happened by replacing my Windows desktop and laptop with a Macbook Pro and Chromebox. The Chromebox on it's own isn't a practical computer yet but as a secondary computer it works great.

Windows 8 has lost the plot

When Microsoft introduced Windows 8 platform and presented it as the future of Microsoft, many were left scratching their heads at the move. What I saw in this process was Microsoft playing the role of follower and not the leader. At least if you are going to follow and copy somebody, try to do it right and have a purpose rather than copying for the sake of copying. At the time Microsoft was leading the new OS with ceo Steve Balmer in charge and he certainly follows the HIPPO model perfectly, that is HIPPO = highest paid person opinion. He seems to have been in charge of the Windows 8 operating system of having apps just like Android and Apple/Mac. The Windows 8 interface initially forced the tablet/ipad like features of apps first in your face and has even copied the mouse gestures of Apple by moving your mouse into a corner for a feature. The irony in all of this is that most people that are not that computer savvy probably have a Windows computer and watching friends try using Windows 8 showed that the OS wasn't as well thought of for their existing users. All of this was done with the assumption and knowledge that Apple has a fairly good integration of combining their desktop/laptop OS with their mobile devices and knowing that Google was moving into this space too. The painful learning experience for Microsoft has shown that their existing base of users didn't want as much change so now they have put the Windows icon back where it used to belong and their Windows 10 operating system is going to look and work closer to Windows 7 which many users have downgraded to from Windows 8.

One of the main reasons to switch away from the Windows based operating systems is I don't trust their ability to fend off computer viruses. This doesn't mean that Mac and other Linux based computers are immune but it is clear the main selling points of Apple and other products like Chromebook are their natural built in security, or rather just how their operating systems are setup and making it difficult for viruses to piggyback on programs. Just have a look at this link from Wikipedia on Linux malware: http://en.wikipedia.org/wiki/Linux_malware "Linux malware includes viruses, trojans, worms and other types of malware that affect the Linux operating system. Linux, Unix and other Unix-like computer operating systems are generally regarded as very well-protected against, but not immune to, computer viruses. There has not yet been a single widespread Linux virus/malware infection of the type that is common on Microsoft Windows; this is attributable generally to the malware's lack of root access and fast updates to most Linux vulnerabilities." That says quite a lot about what Windows is. On the ChromeOS, you can't get any antivirus or malware programs at all because it is all controlled under Google's operating system. On a Mac, some of the popular antivirus companies do have Mac programs but I don't know anybody that has a Mac/Apple that is using any of these like AVG or Avast for example. On a Windows machine this is usually one of the first things you do and even then it doesn't ensure your computer is safe and protected.

In the design and UX community, many shake their heads at Microsoft and wonder who on earth comes up with their designs, layouts and features. When people think about Apple computers, iPhone/iOS and Android phones they think of clean interfaces and intuitive design. When you look at what Microsoft has for some of their products including hotmail, you just shake your head at what you see. Looking at Windows 8 operating system, even the colour schemes use just don't seem to go together. There are just so many talented designers out there that could easily make Microsoft the best looking platform but who knows why things still look the way they do. You can read some comments about one of the Windows 8 designer who explains why some users are struggling with the new layout: http://bgr.com/2014/02/18/windows-8-design-criticism/ Assuming this statement did come from a Microsoft employee this is a bit insulting: "Metro is a content consumption space. It is designed for casual users who only want to check facebook, view some photos, and maybe post a selfie to instagram. It’s designed for your computer illiterate little sister, for grandpas who don’t know how to use that computer dofangle thingy, and for mom who just wants to look up apple pie recipes. It’s simple, clear, and does one thing (and only one thing) relatively easily. That is what Metro is. It is the antithesis of a power user." So computer illiterate people are now little sisters or young girls in general, grandpas or old people in general or your mom. Sounds like some harsh stereotyping going on here but who knows if this is really someone from Microsoft as it comes from Reddit.

Microsoft is fighting hard to at least hold down the #3 spot in the mobile and if you include tablets then Microsoft has dumped a lot of money into this. You can more or less consider Blackberry out of the picture by now. That said most phones out there are either iPhone or Android with Android being the #1 OS and add developers focusing on these 2. I have seen some of the Microsoft powered phones and although they might look nice, there are just too many apps you won't be able to get and for a lot of people, that's half of the fun about having a smartphone. If you look at the latest iOS 8 and Android Lollipop, their interfaces and design are both different but they both seem perfect. When it comes to the surface tablet, I'm not sure what the appeal is here. Their selling point is that it is a tablet that is essentially a computer. Again everything comes down to apps and things being location based. The App store and Android Play market is where developers are spending their time. If people want an expensive tablet with amazing visuals, they get an iPad. If they want a cheap tablet, they get an Android. The Microsoft Surface tablet is very expensive and doesn't have much appeal over an Android. If you want a computer to do work, well you would do that on your laptop.

Well I can't accurately predict the future but the world of computers and phones but this is changing fast and some companies you just trust they know what they are doing. Your Google Analytics data can show you accurately what is happening now and what has changed over the past few years. More mobile phones are being used to access the internet, Google Chrome is the #1 browser, Windows is the main machine for desktops and laptops. So the laptop and desktop market is in a decline, Apple will always be Apple unless they implode and Google has the power to be the #1 or #2 operating system and it seems they could be getting started on it. An article by Computerworld suggests that ChromeOS may snag 5% of the computer market share in the near future. The Microsoft anti Chromebook ad shows that Microsoft is paying attention and wants to 'educate' users on why Chromebooks are not worth it. One of the main points in the attack ad is that it doesn't have Microsoft Office. Yes and who cares! You can get office all through Google docs so you don't have to worry about computer viruses. If it wasn't for open source programs like Open Office or Google Docs offering programs for free, MS Office would be charging a lot of money for their Office program.

Some music I like to listen to while I work and share. This week it was courtesy of Final DJs to conclude 2014 on a good note.

Welcome to our LOLorWTF segment. You can follow #LOLorWTF on Twitter if you are bored and just want to find more of these. This week we have a good laugh at deals Microsoft has with the NFL and CNN spending a lot of money to promote their Surface tablets but only to fail and show that iPad is the tablet of choice. Need an iPad stand? Try the Surface Pro!

Join the discussion below and give us your thoughts on this article, if you want to read more KickstartMonday articles then cflick here. If you think someone else would like to read this article then like or share it. If you have ideas you want to share for future articles just contact us and it would be greatly appreciated. In the meantime may our KickStartMonday help get your week started on the right foot. Have a productive week!
John Wright