Sketch over Photoshop as the new web design tool 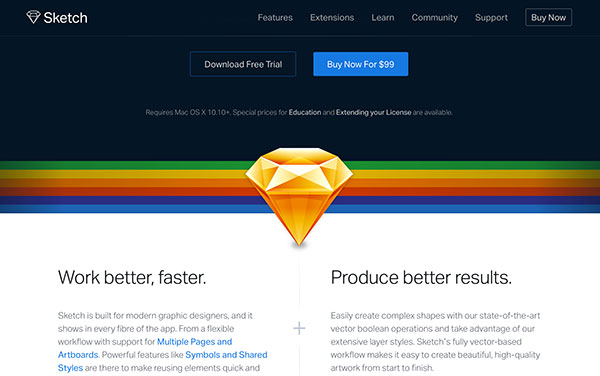 Sketch (sketchapp.com) has already dethroned Photoshop as the top tool for developing websites and many readers could be hearing about Sketch for the first time. If you are a designer that makes websites in Photoshop and haven’t tried out Sketch yet then it is something you should be seriously considering for both your skillset as well as your main tool for making wireframes and creating websites.

Sketch - for Mac snobs only

Probably the biggest downside of Sketch is that it’s only really available for Mac/Apple computers only and this is automatically alienating the majority of computer users especially the developing world where freelancing is big business. Photoshop is of course available for Mac and Windows computers although their creative cloud charges $20/month, it is still an expensive to use for those that actually pay for software. Sketch on the other hand is $99/license so just buy it once and you are set for a long time. For Windows and Linux users, this is a bit extreme to ask them to move their OS for a single tool but I think it is worth considering.

Designing a site in Sketch is definitely faster and easier once you know what you are doing compared to doing the same in Photoshop. The tools, plugins and short cuts just make working in Sketch a lot faster. To make things even crazier you can download these full UI kits which has almost everything you need for making a website or even an app. The kits just save a ton of time whether you want to design an app or just make a website. You can drag and drop header bars, add in text and add in modules like there is no tomorrow. Once you start working with Sketch and learning how to design with it, you’ll realize that Sketch is the only web design tool you’ll need.

Sketch is great for doing quick mockups as well if you want to create a layout without adding a design or skin to it. It has now wiped out my need for mockup tools like moqups.com.

Why Designers are dropping Photoshop for Sketch

The rise of Sketch was so fast, the people at Adobe probably didn’t know what hit them. Adobe’s Photoshop practically owned the domain as being the go to design tool for everyone. Photoshop is still a great tool but if you read what people are saying about switching to Sketch, a lot of the comments are along the lines of not using Photoshop ever again.

Just do a search for “Sketch vs Photoshop” and you’ll find most of the articles highlight why Sketch is so powerful and you might find the odd Sketch hater article.

If you are a designer, having Sketch on your resume as a skill, that could be the difference of getting more work and possibly better paying work. Just take upwork.com for example, people that want a Sketch designer will search for that skillset. For myself I can automatically weed out a lot of designers just by using this filter.

From now on, all designs at HorseshoeAgency.com will be done in Sketch. It might take a bit of time to learn a new tool like Sketch but those that have done it only regret not doing it sooner.

Is Sketch going to keep on growing?

Sketch has already been turning the table and becoming the most reputable designing tool in the world, so it is difficult to tell where else this giant software can go at this point.

Considering the sudden growth and great reputation that Sketch has been able to get since the moment of its launch, it is not crazy to think that this designing tool could become what Photoshop used to be in the past, the number one tool with no competitors near close to it.

Just a few years ago, it was impossible to think that a famous and complete platform like Photoshop would be dethroned so easily and in such short notice. Many factors and aspects have made Photoshop lose plenty of users in recent times.

It can be clearly witnessed how Photoshop thought of itself to be a one and only tool that no one could bet. This sort of arrogance made the tool lose some ground and reputation on the market and gave innovative software like Sketch the chance to rise to the top.

Sketch looking up to the future

Now that Sketch has gotten a reliable reputation and a big fan base to support it, the developers behind the creation of Sketch can start focusing on other key aspects to make the tool even more complete and trustworthy.

For starters, it would be ideal for the developers to start working on a Linux and Windows version. As it was mentioned earlier, this tool is quite good, and many designers have acquired iOS devices to use it, but it is surely a drastic step to take for most of the designers that are still operating through Windows and Linux.

Therefore, developing a dedicated version for these popular operating systems cannot be considered to be a bad idea at all.

Apart from that, many users have expressed their desire to have access to the tool for free. Some of them wish to have a limited version of the tool for free so that they can test it out and work with it for a while to see if they actually like or not. It does not necessarily have to be a free trial version.

Photoshop losing value in a short amount of time

When referring to Sketch, most likely you will end up mentioning Photoshop and vice versa. Needless to say, these two designing instruments have taken over the market and there is no other software close to them in any aspect.

Since the moment of its release, Sketch has garnered the attention of many users across the whole globe. The tool has fascinated many with its amazing design, features and availability.

On the other hand, Photoshop has become annoying and more expensive as the days pass by, forcing the users to look for other alternatives that could help them go through their tasks without having to spend all of their savings on the tool.

As of this moment, Photoshop is set to keep on losing users. The only way to stop this would be if Adobe decides to change its strategies and make the tool more accessible to the whole world.

Otherwise, Sketch and any other designing tool available on the market will keep on growing and becoming more relevant.

5Dimes looking to enter legally to the US market