Why you Should Stay away from Linkedin Growth Hacking Tools 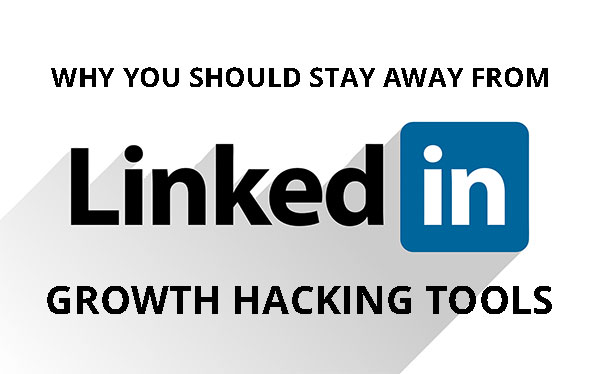 Thanks to these new features, the platform feels more like a social network and people are addicted to social networks as we all know.

4 Years ago one could not even imagine that someone on LinkedIn would have so many followers but thanks to their new features and growth in the userbase, but it is happening right now.

To exploit this amazing potential to get a large following on Linkedin, LinkedIn growth hacking tools started popping up. They would do all sorts of amazing things - Automatically send invites, accepting invites automatically, auto skill endorsing, LinkedIn auto follow, auto like scraping followers of a person, scraping employees of a company, scraping members of a group, the list goes on and on.

Many people used these to build large followings but here are three reasons why you should not use these.

They can lead to awkward conversations

So let's say you are using the auto invitation send module of one of the many tools with a witty message like:

I really wanted to connect. As such, I’ve decided not to send you the generic LinkedIn invite!

You send these to multiple HR managers of various companies to increase your chances of getting a better job.

Let's say 50% of those invites get accepted.

Now you send a followup message to the newly accepted invites saying:

Thanks for accepting my invite. It is a pleasure to (e)meet you. Let's stay in touch!

Now since the tool is sending all these invites and messages in bulk, you don't know the names of most of the recipients.

Now if you get to meet one of these people at a conference who remembers your invite and starts to chat with you but you have no idea who they are, that will be embarrassing.

Something similar happened to me when I was at a Job fair and a person approached me. He was the director of a recruiting firm whom I had “added” on Linkedin. He knew my name but I did not know he was. After seeing my blank face, he knew something was up and was not pleased. You don’t want to be in that position.

They can ruin your reputation

With these Linkedin growth hacking tools, you can send personalized messages on scale. These tools can grab the first name, company name, job title, etc from one’s profile and use it in a message to that person.

So I was doing a campaign where I wanted to greet my new connections “Happy Easter” to warm them up before I talked business with them. Although your use case might be different than mine like sending greetings to HRs of companies in your industry or something else, I can assure you that the results can be equally disastrous.

Anyway, so I scheduled the campaign and messages started going out to the directors of recruiting agencies.

Everything was fine and Dandy till then. I received many “thank you” and “Happy Easter” messages in reply. I was pretty happy.

But then due to some bug in the tool, it sent out the same exact message again to those people the next day (after they had already greeted me back)

This is not networking on scale. This is ruining your reputation on scale. They realized that I was using some tool to send these messages because no human would make that mistake.

All those potential business relations were wasted as a result. And my reputation too when one of the people made a post about this.

The biggest drawback of using these tools is the risk of getting your account banned from Linkedin. Unsurprisingly, no social platform wants its users to game the system and wants to keep the interactions as organic and real as possible.

So after 5 months of “growth Hacking” Linkedin, my account was deleted by the Linkedin team. Even after emailing “Tim” (the person who closed my account), I could not recover my account.

I am thankful that I created a new account to do this “Growth Hacking” on, otherwise my entire LinkedIn presence would have vanished.

I have heard horror stories where Linkedin even blacklisted the IP addresses of people who used these tools. If that had happened to me, I would have lost both my accounts.

So the moral of the story is to create genuine and authentic relationships on Linkedin and stay away from such tools.

Author Bio: Sarah Ashford is the director of recruiter relations at Jobnexus.com, a resume distribution agency. She loves to read travel blogs because she can’t find the time to actually go out and travel the world

Why is AffiliateInsider one of the top affiliate resources of 2021